There’s really no good charging solution for those of us who test phones for a living, so here’s something I hacked together. 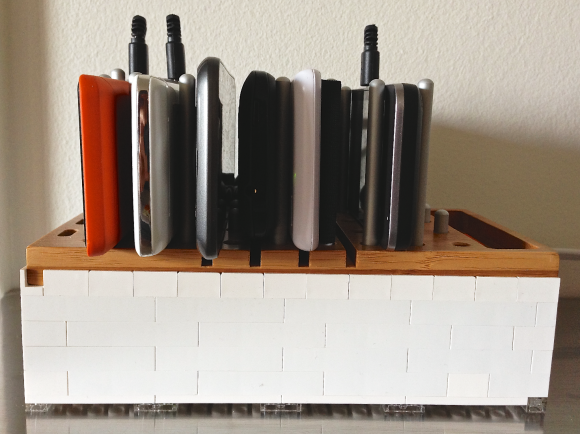 Very clean from the front. Top rack is a MODO modular desk organizer that I backed on Kickstarter, and the bottom is a $15 cup of bulk LEGOS. END_OF_DOCUMENT_TOKEN_TO_BE_REPLACED

Say what you will about PandoDaily, but their tale of Facebook’s disappointing Platform is honest, fair, and perfectly contextualized: http://pandodaily.com/2013/07/23/move-fast-break-things-the-sad-story-of-platform-facebooks-gigantic-missed-opportunity/

Facebook’s inconstant behavior on Platform, however, has never been malicious. Rather, it is a result of an engineering-led culture. Facebook’s platform team started off small, and it was led by programmers. Whenever possible, they wanted to find solutions that didn’t require human intervention. That way the operation could stay lean and move fast.

That approach left Platform without a clear set of policies that would have provided the stability and sense of security that is so crucial to a development environment. It also meant that humans had a minimal role in the quality control process. Unlike Apple, which requires that all apps intended for distribution in its App Store be approved by actual people, Facebook relied on changes to its algorithms to combat things like spam and over-exposure for certain apps.

“What we should have realized is we should have hired someone to go and make a judgment call,” says a former Facebook executive, who doesn’t want to be named because he retains close ties to the company. He says the app store, or lack thereof, was one of the Platform’s single biggest points of failure. “The team that was driving the platform was the engineering team and the technical product team. We knew how to develop products, but we didn’t know how to build a payment system or build an organization of human judges.”

I can understand why Facebook went that direction. They wanted a robotically, algorithmically equal playing field, and if the rules required a human judgement call then they weren’t the right rules in the first place. This is an honorable goal to ensure that the rules are enforced consistently, but there’s still a human on the other side of that API, and humans are nuanced. Circumstances matter. Motivation matters.

Say what you will about the US judicial system, but it was also designed to take nuance into consideration, with judges who explain the law and how it applies to the many complex situations we humans get ourselves into.

In the months before Pando’s article went up, I’d heard that Facebook posted several job openings for “Platform Integrity Risk” managers. These roles are filled (or canceled) now, so I’d like to think that Facebook has learned from their failures and is already taking corrective action. As stated in the article, they’ve clearly still got momentum despite the shortcomings with Platform.

If you have developer policies, take Facebook’s story as a warning and make sure you have a high court in place — whether it be a community manager or dedicated policy review team — who can stand up to internal politicians, balance the shifting sands of a growing product, and earn developer trust.

Today is my last day at Palm. I say this with regret, both for what could have been and missing out on what is yet to be, but also with relief for being able to begin a new chapter in my career.

The image above was taken at the Palm campus store during the first hours of the infamous TouchPad fire sale, where the device suddenly became a hot commodity and eager buyers lined up across campus every day for weeks just to get one, and for a brief, shining moment, the TouchPad was the #2 tablet on the market. This is how I choose to remember Palm, being stunned and a little high with the unexpected excitement, minus the knowledge that we were trying to make the best of an unwinnable situation. END_OF_DOCUMENT_TOKEN_TO_BE_REPLACED 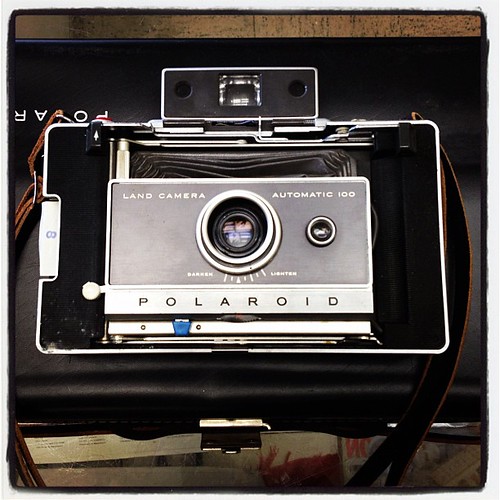 A couple months ago, I found a beautiful vintage camera at a thrift store. I had no idea how to even open it, or if film was still available…and the $50 price tag was just outside of my impulse buy zone. I copied down all the info I could and went home to research, and by research I mean that I asked twitter for permission.

Dieter has seen this play out before, so of course he immediately told me to buy the damn thing and get it over with, but I wanted to make a rational decision here. Yes, I could get film, but the price was a little high, especially for something that may or may not even work. But once dear friend and smart gadget nerd Greg told me to go for it, I apparently bolted out the door immediately to go snag it. END_OF_DOCUMENT_TOKEN_TO_BE_REPLACED

Not a real Lytro, but a scale model made of solid freaking metal.

I have a one-week opportunity to pre-order a Lytro light-field camera. It’s a revolutionary way of thinking about focus, but there are still a lot of unanswered questions, and I haven’t decided yet if I’m willing to bet $400 on Lytro having the right answers.

They’re pitching their product as a solution for the focus problem, framing the technology to make the camera seem more accessible to the everyman. This is all wrong. Auto-focus is smarter than the everyman, and there is no focus problem. Fortunately for Lytro’s marketing team, this product has landed squarely in the sights of the hardcore photography enthusiast (and based on comments on Lytro’s blog today, looks like they weren’t prepared for that). Hardcore enthusiasts understand that the point of this technology is to create a new photographic genre, to use interactive focus to tell a story. END_OF_DOCUMENT_TOKEN_TO_BE_REPLACED

TechCrunch is on the precipice. As soon as tomorrow, Mike may be thrown out of the company he founded. Or he may not. No one knows. And if he is, he will be replaced by — well, again, no one knows. No one knows much of anything. Certainly no one at TechCrunch. This site is about to change forever and we’re in the total fucking dark.

Don’t you hate it when that happens?

I still too freshly remember the anxiety of waiting for news to unfold while the house you’ve poured your heart into suddenly comes crashing down, the frustration of wanting to take matters in your own hands, to DO something, say something, reach out to the people who care and ask for their help to make your story known, to say how much you MATTER…

Unfortunately, companies rarely have approved messaging ready for this kind of situation.

Emotions are high over at TechCrunch right now, and the team clearly isn’t going for the standard radio silence PR play and waiting for the situation to play out. Because politics and bad decisions aside, for the people on the front lines, the world they know is fucking solid. I respect the hell out of them for standing up to their critics and saying that, raw emotions and all. Especially so.

My sage advice for TechCrunch? Focus. They will never break you if you stick together and keep telling your story.

Several years ago Arrington and I were headed to some conference and I asked him about how he sees himself. Did he consider himself a blogger or a journalist, I asked. His answer stuck with me all this time: “I’m an entertainer.”

After finishing this post, I was sitting here in the dark of my office thinking the same thing (but without the real life story to back it up). The web responds well to showmanship. Not that anyone should be over dramatic or start shit just for attention — Internet showmanship is a realistic balance of emotional highs and lows, and few are able to take their readers on a journey quite like Michael Arrington. I leave the discussion of whether journalism is an appropriate environment for that kind of theatrics as an exercise for the reader. 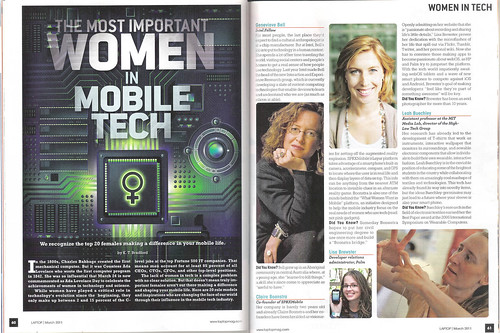 A few weeks ago, I drafted a scathing post about how obnoxious Instagram is for encouraging people to use tacky filters instead of helping them take better pictures. I had also just gotten a set of Photojojo’s cameraphone filters, and was more than a little smug for experimenting with glass. Well, I’ve been using Instagram since Christmas, and I’ve realized my anti-Instagram argument is just as short sighted as someone criticizing twitter because the only posts they see are what their friends had for lunch.

Tools are as creative as the minds using them, and the best tools get out of the way to help us live better (inspired, connected) lives. And for all its pixel destroying flaws, Instagram is great at that. END_OF_DOCUMENT_TOKEN_TO_BE_REPLACED

9:30 pm – “On the ground in San Francisco. Nights here really are quite cool and windy. This excites me for some reason.”

I wrote those words in my journal (yes, on paper) on July 19, 2007, when I decided to fly up for Wordcamp on a bit of a whim. Although my journal entry was brief, it marks a pivotal moment in my life. I remember I was in the airport and going up an escalator to get to the BART station. As I reached the top and looked out over the city for the first time, it was like I’d taken my first breath full of energy and life and possibilities, and I immediately knew that something in this city was waiting for me. The moment was so intense, the memory of it can bring tears to my eyes. END_OF_DOCUMENT_TOKEN_TO_BE_REPLACED

On Friday, Dan Rumney made some important announcements on the preDevCamp blog that I’d like to expand upon.

Meet your new organizing team
To fill in for whurley‘s and Giovanni‘s unfortunate departures, Greg Stevenson and myself will be stepping in to help co-ordinate the various preDevCamp events around the globe.  Greg has already been hosting some webOS training sessions (pre-preDevCamps, if you will), and will be invaluable bringing this knowledge to the community.  And while I’ve helped plan a barcamp or two, I’m positively giddy for the chance to help build a stronger community and facilitate knowledge transfer on such a massive scale.  Combined with Dan’s experience bringing preDevCamp where it is today, I think we’re going to make a wonderful team. END_OF_DOCUMENT_TOKEN_TO_BE_REPLACED