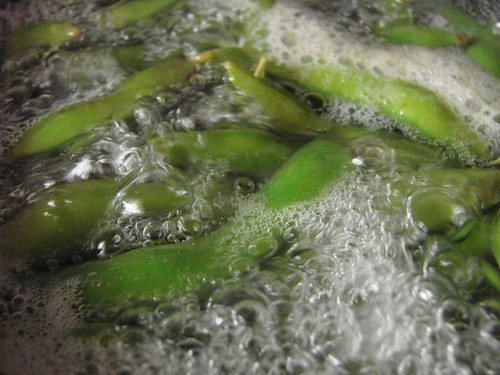 More and more I’m noticing health-conscious people say “I don’t eat soy” with the same self-righteousness with which vegans inform their more barbaric friends that they don’t eat meat, saying that something in soy mimics estrogen and can have noticeable effects on the development of children, especially males. Being as distrustful as I am of the American food system, I bookmarked this snippet for further research.

A quick search informed me that the concern is caused by phytoestrogens, which are plant compounds that are molecularly similar to and therefore can have similar effects as estrogen. Flax seed and other oilseeds contain the highest total phytoestrogen content, followed by soy bean and tofu. The benefits of these foods have been touted in the health food circuit for years, and soybeans have been a major staple of the Chinese diet for oh, five thousand years. And they seem to be doing just fine.

Yes, “science works, bitches,” but the history of nutrition science has proven time and time again that it cannot match the knowledge and efficiency of thousands of years of eating. Any Michael Pollan reader can tell you that the problem with nutrition science lies within the name of the practice itself — based on the way scientists need to remove or control every variable besides the one they are testing, they are forced to take nutrients out of the context of food and food out of the context of culture, removing systems that have evolved with us ever since humans started eating. Why should I suddenly (and by suddenly, I mean within the last 100 years) need a scientist to tell me what to eat?

Now here’s where I confess that this post started as a simple tumblelog link to the wikipedia page on phytoestrogens that grew into a rant too long for Tumblr’s description field. I don’t have the answer that could explain why our recent scientific development has never slowed the Chinese down, but I think the point I’m trying to make here is that I don’t care.

Or maybe I’m just trying to validate why I shouldn’t feel guilty about my brand new soymilk maker.

Edit: Further research has uncovered that Kaayla T. Daniel, the author of the “answer” article linked above, has also written a book with the same title. A number of helpful amazon reviewers have uncovered that Daniel and her publisher are both very closely associated with the Weston A. Price association, which includes raw milks and high meat consumption among their advocacies. The reviewers are quite critical of the author’s apparent lack of objectivity, but I found the site to be largely in line with a lot of my current ideologies (avoid products of food science, choose local organic etc etc etc). A number of reviewers also replied that Daniel has cited poorly formulated and cherry picked studies to create a very one-sided argument against soy. Reader beware.